The Minority Status DNA of the Church 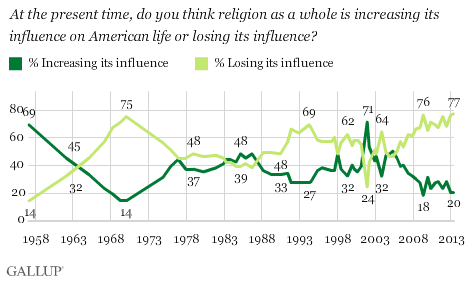 Religion is losing influence in American society, according to 77 percent of those recently polled by Gallup. It’s not the first time Americans have been pessimistic about religion’s influence upon society. Gallup started polling on this question in 1957. At the height the Vietnam War in 1970, 75 percent of those polled answered the above question in the negative. During the 1990s, those answering “religion is losing influence” hovered near 60 percent. It was only after the terrorist attacks of September 11, 2001 that increasing influence numbers outpaced losing influence numbers. That positive bump only lasted two years, however.

Could this losing influence trend reverse itself in the future? Absolutely.

Contrary to what the Gallup poll might suggest, the church in America is not in the process of dying. As of 2014, 70 percent of Americans claim Christian affiliation, a clear majority. Not all of these, however, regularly participate in the life of a gathering faith community. According to the Pew Research Center, Catholics and mainline Protestants are currently losing significant numbers of adherents, while the category grouping “unaffiliated” or “none” (many of these young adults) conversely grows – now at 23 percent, nearly one in four Americans.

As a pastor in a mainline denomination (ELCA) that is suffering numerical decline, I proclaim that the wane of religious influence and participation is not the worst thing that could happen. As I’ll explain, it’s a potentially good situation.

For the first 300 years of its life, the Christian church was a minority status organization. The apostle Paul described the believers in the church of Corinth as not measuring up to elevated human standards of wisdom, influence, or nobility. Even so, this small and obscure organization – the gathering community in Corinth being one example – maintained vitality. Its founding DNA, if you will, was infused with an ability to thrive in difficult circumstances. 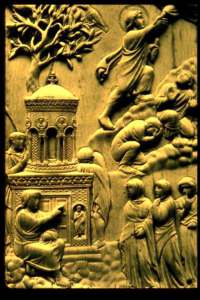 Roman Emperor Constantine gave his blessing upon the church in 325 CE, thus enabling it to (eventually) grow into what most American Christians know the church as – a majority status institution. There’s nothing inherently wrong with a majority status institution, but care must be taken that corruptions, entitlements, and ineffectiveness don’t infiltrate the institution and desecrate its mission. The American auto industry of the 1970s and ’80s is a prime example – remember the Plymouth Volare and the AMC Pacer? These inferior models, indirectly, helped make the way for the Honda Accord and Toyota Camry – significantly better automobiles, and from foreign manufacturers.

Like the US auto industry, the American church is not what it used to be. In the 1950s and early ’60s, social pressures dictated that respectable citizens be church members; church attendance numbers crested. The pendulum has now swung decisively in the other direction, as attributed by the growing number of “nones” or religiously unaffiliated, and shrinking church memberships.

It’s quite possible that the church is in the process of becoming leaner and more focused. The pendulum has swung far enough to the other side that churches no longer need to try to measure up to what used to be. Our numbers aren’t what they used to be a generation or two ago? So be it! Biggest is not always best. Infused into our organizational DNA is the ability to thrive as a minority institution.

The 21st century could be a time of clarified mission for a number of our churches. Mission that includes cooperation with peoples of differing faith traditions on topics of common interest: compassionate service to the human family for the advancement of common good; an impassioned voice for justice when the economy unfairly rewards the advantaged at the expense of the disadvantaged; the promotion of peace in the face of war. And all these things done in the name of that which we hold to be holy.

When peoples of differing religions operate together in this fashion, positive religious societal influence will proliferate and the world will be a better place because of it. 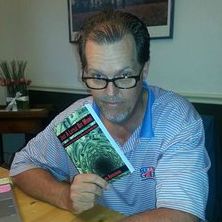 Pastor Tim Anderson is a bilingual Protestant pastor serving a dual language congregation, St. John’s/San Juan Lutheran, in Austin, Texas. This article was originally published on his book blog, justalittlebitmorebook.com, and is representative of the views expressed in his book, Just a Bit More: The Culture of Excess and the Fate of the Common Good.