In Search of Paul

This trip is open to anyone over the age of 18 who is serious about studying scripture and growing their understanding of the first century Christian movement. Preparation is required.

Lutherans and other churches of the Reformation may also have a “fifth Paul”: the “Paul” of the 16th century.

How did Paul understand justice, righteousness, salvation, faith, law, and gospel as he wrote to diverse urban people living in a society dominated by patronage and Roman Imperial Theology? What does his 1st century gospel mean in a 21st century context?

These are some of the questions we will explore as we travel through the world of the early church focusing on Paul’s autograph letters.

Tuesday, April 6th
Fly out of Houston or other Turkish Airlines hub; direct flight to Istanbul. Tutku Tours can arrange departures by other carriers. This may nominally effect trip cost.

Wednesday, April 7th
Arrive in Istanbul, meet our guide for Turkey, Cenk Eronat, and travel to our hotel. Dinner together in the hotel dining room overlooking the “old city” of Istanbul.

Thursday, April 8th
We start at Istanbul where we glimpse the “imperial church” of the early 4th century under Constantine. We visit the hippodrome, archaeological museums, Hagia Sophia, Hagia Irene, and the Topkapi Palace.

Friday, April 9th
We depart early for the Greek border, meet our guide for Greece, Voula Kalapoda, and then travel to Philippi. We visit the traditional river site where Paul met Lydia and see the magnificent baptistery built there. At the river we discuss Paul’s letter to Philemon and its patronage subtext. 1st century city life then emerges in the ruins of ancient Philippi. Overnight in Kavala, modern Neapolis.

Saturday, April 10th
We get another glimpse of the Via Egnatia that Paul walked from Neapolis to Philippi, then on to Thessloniki where we see the Roman forum, the arch and mausoleum of Galerius, and the archaeological museum. We stop at the tomb of Phillip II of Macedon, father of Alexander the Great, to appreciate the roots of imperial theology. Overnight at Kalambaka/Meteora.

Sunday, April 11th
Visit Varlaam Monastery, built 1541, high atop the rocks of Meteora; reflecting upon the medieval theological worldview of its art. After visiting Varlaam Monastery, we have a traditional Sunday meal; discussing Philippians in the afternoon. Eucharist to end the day.

Monday, April 12th
We stop at a studio where icons are hand painted and can be purchased, then travel to Delphi to explore the cult of Apollo. After visiting the archaeological museum, we overnight in Delphi; taking a look at Galatians before turning in.

Tuesday, April 13th
In Athens, we visit the Areopagus where Paul delivered his sermon about “an unknown God” and then climb the acropolis to see the temples of Athena, Nike, Poseidon, and Augustus. There will then be free time to visit the new archaeological museum or to have a leisurely meal “al fresco”.

Wednesday, April 14th
We visit the site of ancient Corinth with its excellent ruins and museum. While on the grounds, seated in view of the Temple of Apollo and the ancient meat market (1 Cor. 8), we discuss 1st Corinthians. After lunch we head for the port of Athens, say “Goodbye” to Voula Kalapoda, and board our 7:00 PM ferry to Patmos. Good dining aboard and cabins with clean linens and bath. Arrive in Patmos about 3:00 AM, walk a short distance to our hotel, and go back to bed!

Thursday, April 15th
Still in Greece, we will visit the traditional “Cave of St. John”, reflect upon the imperial context of Revelation, and then visit the Monastery of St. John. Lunch will be by the seaport and then we take a 4-hour boat ride to the Turkish port of Kusadasi – discussing Romans on the way. At Kusadasi we meet up again with Cenk Eronat and go to our hotel.

Friday, April 16th
The ancient city of Ephesus gives the most impressive glimpse of 1st century urban life. The Library of Celsus, Temple of Artemis (one of the 7 wonders of the ancient world) Temple of Hadrian, Temple of Domitian, and the “terrace houses” are but a few of the restorations. After a “1st century lunch” we will visit a local “cottage industry” store to see how Turkish carpets are made; and an opportunity to purchase carpets!

Saturday, April 17th
Leaving Kusadasi, we will see the magnificent Temple of Apollo at Didyma, Asian counterpart to Delphi – complete with oracle. Then on to Aphrodisias with the Temple of Aphrodite, the Sebasteion (the best eample of Roman imperial theology), monumental gateway, stadium, and museum—where “the god fearers” are mentioned. Overnight at a relaxing thermal spa hotel at Pamukkale.

Sunday, April 18th
At Hierapolis we see the tomb of Philip the Apostle and the thermal springs, then journey to Laodicea with its many newly excavated and restored ruins; including a magnificent 4th century church. After a brief stop at Sardis and its restored gymnasium and synagogue, we will arrive at Izmir (ancient Smyrna) and have dinner on the waterfront.

Monday, April 19th
We head for the acropolis of Pergamum with its great theater and temples to Athena, Zeus, and Trajan; then visit the Asclepion, a center of healing where the great physician Galen practiced. Overnight at the picturesque seaport of Assos.

Tuesday, April 20th
After climbing the acropolis of Assos – Turkish coffee on the climb – that has a temple to Athena dating from 530 BCE, we head north to Alexander-Troas (Acts 20). Then on to Troy; founded 3000-2600 BCE. We overnight in Canakkale, discussing 1st Thessalonians before retiring for the day.

Wednesday, April 21st
We cross the Dardanelles by car ferry and drive through the area where the Battle of Gallipoli was fought in WWI. Arriving back in Istanbul, we visit the Spice Market before going to the hotel to enjoy our farewell dinner.

Thursday, April 22nd
After a leisurely morning and breakfast, we leave for the airport for our fights; chasing the sun back to our home destinations. Welcome home!

NOTE: There may be unforeseen adjustments to the itinerary. 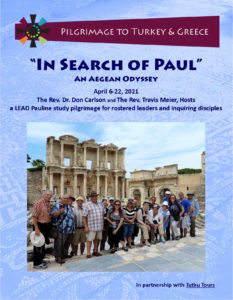 Print-ready In Search of Paul 2021 Brochure 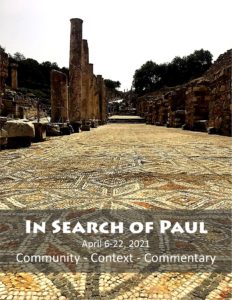 Registration for 2021 is closed. Contact LEAD for information about future pilgrimages.

What about COVID-19?
We anticipate that a vaccine will have been available prior to our leaving on April 6th at the beginning of the second quarter of 2021. The protocols in Turkey and Greece have been unified and consistent in that they were “federally” mandated. Hotel rooms and busses are rigorously sanitized. Depending on conditions in April of 2021, our group will mutually agree on our practices and procedures.

What if I need to cancel for any reason?
For new 2021 registrants, A FULL CASH REFUND (minus a $100 service fee) is available from LEAD until February 20, 2021. After February 20, 2021, a cash refund (minus the $100 service fee and airfare) is available until March 7, 2021. The airline ticket will be yours to negotiate with the carrier. Further cancellation policy is listed in the brochure and is very lenient for 2021.

Is it safe to travel in Turkey and Greece?
LEAD, in partnership with TUTKU Tours, has been offering this pilgrimage since 2014. Over 130 people have participated. People have always been and felt safe. The trip is registered with the US State Department and we receive all travel updates.

How much spending money should be brought?
Always a tough question in that people’s spending habits vary widely. Perhaps about $250 USD worth of Turkish Lira and $350 USD worth of Euros. ATMs in both Turkey and Greece can provide additional monies should more be needed.

What about passport and visas?
No visa is required for Greece since they are in the EU. A Turkish e-visa ($50 USD) can be purchased online within 90 days of arrival. Participants must carry a US Passport that does not expire within 6 months of April 22, 2021.

How many people will be in the group?
The 2020 trip was postponed to 2021 because of COVID-19. Twenty-four 2020 participants remain registered for 2021. We anticipate there to be somewhere between 24 and 34 participants.

Is the trip physically demanding?
People from age 30 to 70+ have done this trip. However, many archeological sites may have uneven footing, ramps, stairs, changes in elevation, and are certainly not ADA compliant. Some days may require 5000—10,000 footsteps. Walk if you need to get in shape. Please inquire if you have questions or mobility issues.

Is there any other preparation needed?
Yes. There are three “essential readings” listed in the brochure. Upon registration you will be invited to join the Facebook Group for ISOP 2021. It is a way to get to know people prior to the trip and to share ideas and information. There will also be 3 online ZOOM meetings (January, February, and March) in which we will discuss the readings. (This is not primarily a “sight-seeing tour”. It is a 1st century emersion in which participants, through reflection and conversation, grow in their understanding of Paul, his theology, and the context of the early “church”.)

What airline will we fly?
TUTKU will try to book everyone on Turkish Airlines. If you need to fly to get to a Turkish Airlines hub, TUTKU usually makes those arrangements at no extra cost. TAL is a Star Alliance member. If you want to use Star Alliance miles/points you need to make your own flight arrangements; in which case TUTKU will generally give you a “land only” rate of $3390. Contact Pr. Don Carlson if you plan on doing this.

Can we tour on our own before or after the LEAD event?
Yes. But then you also need to make your own flight reservations. Contact Pr. Don Carlson if you plan on doing this.

What kind of clothing is needed?
Very casual and comfortable. Bring items that can easily dry after being rinsed out. Dress in layers. Have two pair of good walking shoes: well broken in.

Is this mostly for “rostered leaders” – pastors and deacons?
No. Our groups are usually about 50/50 rostered and laity. Makes for better conversation!

Do I need travel insurance?
That is up to the individual. It is recommended that you at least have medical travel and medical evacuation insurance, which is very nominal.

Is any scholarship assistance available?
There are a limited number of $1400 scholarships for ELCA leaders rostered 10 years or less. Contact Pr. Don Carlson.  To advocate for the participation of more recently rostered leaders, a letter to the Congregational Council can be downloaded here. 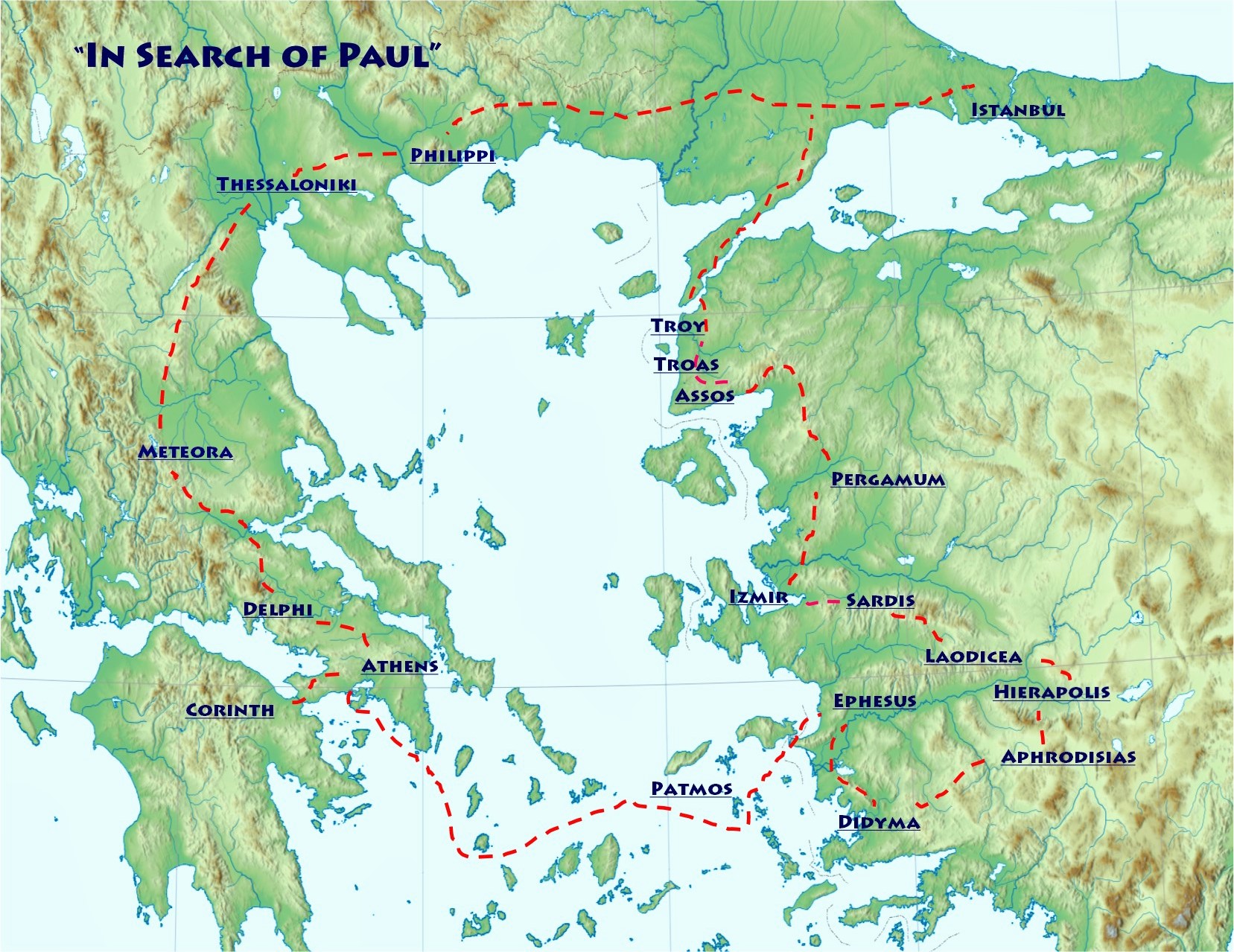 It does not include:

I knew Paul and Empire in my head, but to travel the roads he walked brought a new depth and nuance to my understanding. Now I can more competently and confidently connect our tradition of church and culture in my preaching, teaching, and advocacy.

To see, touch, read, and feel the archaeological findings in each site we visited, introduced me to the Paul I never knew. It was a transforming experience to understand the first century and begin to grasp what that means for teaching and preaching Pauline letters in the twenty first century.

This trip greatly expanded my knowledge of Paul’s journeys. I have been able to practice new ways of reading Paul and talking about him and the whole bible. This trip was not just a gift to me, but also a gift to the way I will be a leader in the church.

To explore the places where Paul visited and the places to which he wrote letters was absolutely amazing. I now appreciate the context of the Roman Empire on Paul’s writings.