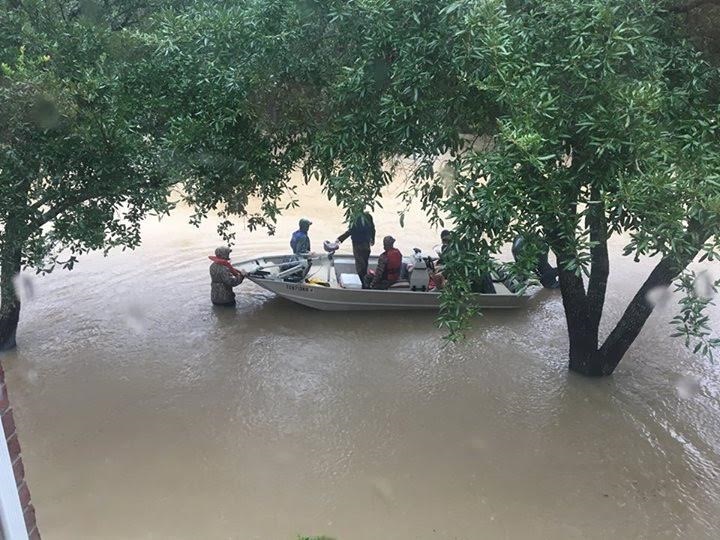 “How do we know that the love of God dwells in us?
If we take upon ourselves the need of our neighbor.”
– Martin Luther

Where was God’s promise during Hurricane Harvey?

God was in the hands and faces of everyone we met.

Here is just one story out of thousands:

We had brought some furniture upstairs, just on the off-chance that some water might come in. We had brought the microwave, toaster and coffee maker up as well. We were sure we were all set for a day or two. But really, none of us thought we would actually have to do that.

It was a huge shock when the water came in – not from the sandbagged and taped doors – but from everywhere. And so fast!

Monday we finally called for help. We had invited Mark’s 90 year old mom to weather the storm with us, and we felt that we had to get her to safety.

The people who boated in (right up to our front door!) to get us were part of the Cajun Navy. We were the last neighborhood they were going to help before they headed back to Louisiana. The storm had moved east and their own friends and family would need help.

Once out of the neighborhood, a fleet of cars waited to take people to safety. The man who drove us had worked for hours, trying to get around flooded streets. His wife was worried about him as the daylight faded.

We ended up at the high school. The next morning. we saw a long line stretching out the front door. We asked if they were looking for shelter. We were told no, that’s the line to sign up to volunteer. Mountains of donated goods lined the hallways. Restaurants brought food. A veterinarian came to check out the pets.

A family from church took us to their house. The next morning, they had an evacuation order themselves. That same day they found out that their business was flooded in 9 feet of water.

muck out crew from San Antonio

The people who helped us muck out our house were from a San Antonio mission. They prayed with us every break.

The men who dried out the house were from Orlando. They were on the phones with their own families dealing with a hurricane too.

Some of the workers who helped re-build our house were flooded out of their own houses. They were moving their families into hotels or apartments, while they worked to put walls and floors into our house.

Restaurants, shops, and strangers with sandwiches and water all poured out help and love.

Everyone who helped us did so not out of an abundance of time and goods, but just the opposite. They helped us in spite of their own troubles.

We saw God in the faces of all the people who helped us. African American, East Indian, Hispanic, White, men and women, young and old – so many different beautiful faces. All of them looked like a community of grace and God’s love. Here is where we see God’s promises to us in action. We will carry that in our hearts, deeply grateful, forever.