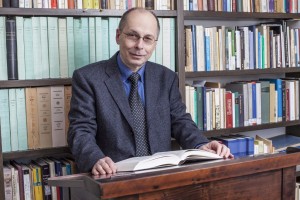 Dr. Theodor Dieter is Senior Research Professor at the Institute for Ecumenical Research in Strasbourg, France, after having served as research professor there since 1994 and as its Director from 1998 to 2018.

Dr. Dieter is an ordained pastor of the Württembergische Landeskirche. He served as consultant for the international Lutheran/Roman Catholic dialogue for 25 years as well as for the Lutheran/Mennonite dialogue (leading to “Healing Memories: Reconciling in Christ. Report of the Lutheran-Mennonite International Study Commission,” 2010). He played a central role in writing the document “From Conflict to Communion: Lutheran–Catholic Common Commemoration of the Reformation in 2017,” translated in 18 languages, and in preparing the ecumenical service in Lund on October 31, 2016 with Pope Francis, LWF President Bishop Younan, and General Secretary Martin Junge.

Besides Tübingen, he taught and lectured in Hong Kong, Decorah, Iowa (USA), and Aarhus (Denmark). Annually since 2009, he has led seminal seminars on the theme “Studying Luther in Wittenberg” for Lutheran theologians and pastors from around the world. Together with Prof. Wolfgang Thönissen of the Catholic Johann-Adam-Möhler-Institut in Paderborn, Germany, Dieter is the head of a working group of fourteen Catholic and Protestant theologians reconstructing the debate on Luther’s 95 Theses on Indulgences.

Dieter’s publications include Der junge Luther und Aristoteles (“The young Luther and Aristotle,” 2001) and a long list of articles on Luther’s theology, social ethics, and Lutheran ecumenical relations. He is editor of the Institute’s study “Lutheran Identity.” In 2017, he was awarded honorary doctorates from the Catholic Theological Faculty of the University of Erfurt, Germany – the faculty where Luther studied theology –, and the Catholic University of Leuven, Belgium – the faculty which was among the first to condemn Luther’s theology. In the same year, he received the prestigious Ratzinger Prize from the hands of Pope Francis.