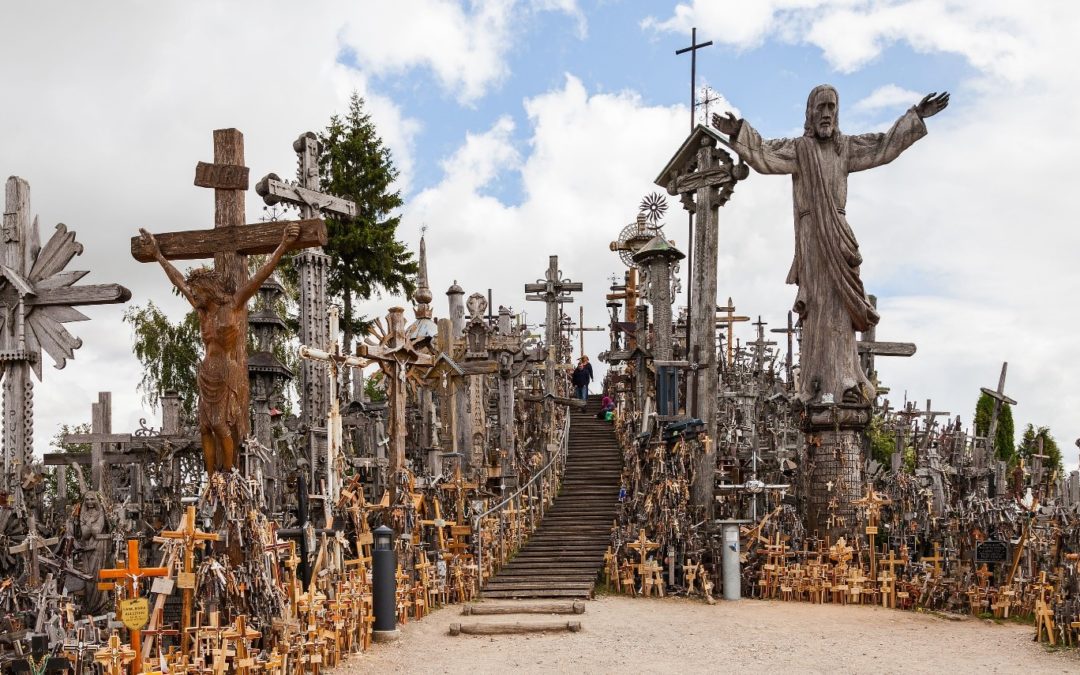 At the very heart of the Christian faith, there is a cross. It expresses our deepest fears, our pain, betrayal, abandonment, and death. Yet the cross is also a symbol of humanity’s greatest hope – that life does rise from death and that God is trustworthy.

It can be tempting to update our symbols. It boils down to how we will answer this question:

Hear this as a word of grounding. We can remind ourselves and a hurting world, that we do not suffer alone. We cannot heal alone. This is a counter-cultural statement in an individualized, self-protecting universe.

The shadow of the cross falls over the entire New Testament, just as it falls over us.

Christians have lived through times of great suffering and atrocities in the past, hanging on to the cross of hope as a lifeline.

Take a moment to reflect on The Subversive Cross in El Salvador. 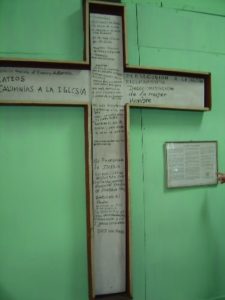 A simple wooden cross, painted white, was placed at the front of the church. Congregation members, mostly youth, came up to the cross, took a black marker, and wrote the sins on the cross, such as persecution of the church, hunger, discrimination against women, ambition for power, murder and violence. As they identified the sins of their country and their people, they also committed themselves to work toward forgiveness, and to be strengthened for liberation. The cross also carries messages of hope and love, as a testimony to the transforming power of God. After the reconciliation service, the cross remained as a symbol within the church.

On the same day when the six Jesuit priests were murdered by elite Salvadoran troops, soldiers arrived at Resurrection Church looking for Bishop Gomez. Their search did not find Bishop Gomez, but they did find that simple white cross. Rather than capturing the bishop, the troops arrested 15 people, and took possession of the cross and took it away to the army compound. Presumably the soldiers thought this cross was evidence of the subversive activity going on in the Lutheran church.

The church was deemed to be subversives by the government for siding with the poor and doing such radical things as operating a refugee camp for families fleeing the armed conflict, or for teaching the poor that they were entitled to equal human rights with the rich and powerful. Learn more here.

And reflect on The Hill of Crosses.

In the country of Lithuania, there is a pilgrimage site called the Hill of the Crosses. Here, over 100,000 crosses of all sizes and descriptions, are spiked into its sacred ground. Pilgrims come to this hill from every corner of the country, carrying their crosses, desiring to leave a memorial to their pain, to express a heart-felt need, or to offer thanks for a recent blessing. Some hold pictures of loved ones who have died during the Nazi occupation, who were deported to Siberia, or who suffered and died under the sign of the cross.

Bulldozed over and over, the Hill of Crosses is a bold powerful symbol of resistance to oppression, an enduring sign of strength and hope. Learn more here.

Now, reflect on the cross from your congregation.

Branding is not a logo. It is a way of being. A culture that is being shaped within the struggles of depression, pandemic, addiction, abuse, hunger, and poverty that brings hope that can only come through God’s trustworthy love.

This is our brand of Christianity. It is our daily pilgrimage.